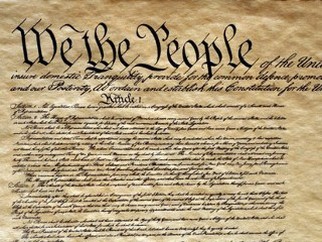 The United States Constitution is a living document that has evolved over time through the process of amendment.  Amendments actually add new text to the Constitution.  The 19th Amendment was ratified in 1920, shortly after WWI. It gave American women the right to vote. Despite this amendment, most important political offices continued to be filled by men.  The amendment still had important effects.  It meant that under law, women were the equals of men.  Women also enjoyed greater freedom and responsibility than earlier times which demonstrates the evolution of the Constitution over time through the amendment process

"The Industrial Revolution brought about major changes not only in cities, but in rural America as well.  Before machines were used, one farmer could harvest 7.5 acres of wheat per year. With machines, he could harvest wheat on 135 acres.  Scientists also developed new kinds of wheat seeds that could survive northern winters.  These developments were examples of what was happening in many areas of agriculture."

Explain two additional ways farming changed as a result of the Industrial Revolution.


CHOICE A:  I think mechanization was one of the ways farming changed because it was effective.   I feel that because as more was being invented, the more cool machines were coming into farming. Farmers went from using hand tools to machines.  I think this is what caused an increase in production because more could be produced.  And because more could be produced, the more cheaper goods were, but farmers could still make money I think. This was all in part to the Industrial Revolution.

CHOICE B:  The Industrial Revolution was a time of great innovators and productivity.  These innovators made life for farmers who, at the beginning of the Revolution only harvested 7.5 acres of land, much more productive and profitable.  At the height of the Industrial Revolution, farmers could then harvest 135 acres, which caused a gradual increase in production over the next several years.  The increased production made life much more profitable for farmers and one of the leading causes was the mechanization of farming.  Innovators and farmers began finding new and more effective ways to farm their crops while increasing production at a steady pace.  Farmers went from using hand tools to machined tools which contributed to producing more in less time.    The mechanization of farming that contributed to increased productivity skyrocketed profits and made life easier for many throughout the country during the Industrial Revolution.